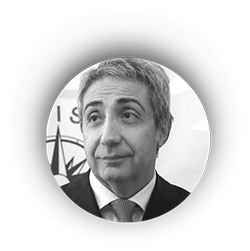 Founder and shareholder of Gestioni Industriali, also a chemical expert, he completed his studies in Milan. Carabiniere on leave, he served in the corps in 1975-1976 with commendation to the civil value. He has been appointed as Knight of the Order of the Holy Sepulchre. He worked for twenty years (until 1992) as an employee of the multinational SOLVAY S.p.A. as a Commercial Manager for industrial chemicals. A businessman since 1992 when, together with other entrepreneurs of this sector, he established the Todisco Group, through which he plays his role in Gestioni Industriali. Working in Italy for a long time in the production, importation and distribution fields of chemicals for industry throughout the country, the Todisco Group represents the Italian market leader in the distribution of basic chemical products for the industry. He holds managerial positions with industrial delegated powers within the Todisco Group enterprises and as a Chairman of Gestioni Industriali he defines the marketing strategies and policies for the subsidiary companies.

Founder and shareholder of Gestioni Industriali, graduated with merits in Business Economics from the Bocconi University in Milan, for more than 15 years he has been working at the strategic planning and support of takeover/development extraordinary actions with main focus on the pharmaceutical and chemical sectors. He has coordinated several operations in Italy and abroad, flanking funds and industrial companies in the processes of restructuring and relaunch with internationally relevant production sites. At present, he holds the following positions: Chairman and Managing Director of Società Chimica Bussi SpA, Executive Officer at Caffaro Green Chemicals Srl, Chairman of the Chemical and Pharmaceutical section of Confindustria Chieti-Pescara and vice-Chairman of Special-Affairs, a Milanese M&A consultancy boutique. As the Managing Director of Gestioni Industriali he is responsible for defining and implementing the corporate investment strategies, coordination policies and research and development projects within the subsidiary companies.